ChemackiLerner from Smile for London on Vimeo.

Submitter Profile
Phil Harder is a dance and music video director, originally from Wisconsin and now based in New York.

Which piece of moving image most inspired you to move into this field?
When I was in college I happened across Orson Welles “The Trial” on television. I had no idea film could be used this way. I didn’t understand it but wanted to learn more. I began studying film. I’m still experimenting with film techniques that create a different reality.

What’s the weirdest thing to have happened to you when making a film?
I was making a short based on a small town photo on a Sonic Youth record. I recognized the town from my youth. I drove to the town, set up my camera to match the 1970’s photograph, then a friend and I acted out a murder in broad daylight. I rolled 100 feet of film, about two and a half minutes. I was “killed” and the film ran out. At this point about ten real cop cars pulled up with guns drawn. We were arrested for disturbing the peace. My only regret was I didn’t have enough film to capture our Hollywood style arrest.

What is your all time favourite music video?
Minutemen “This Ain’t No Picnic”

What is your favourite thing about London?
I was married in London, but besides that: art house cinemas, plenty of pints and late night fish and chips.

What has made you smile today?
Coffee at 9D in New York

What benefit do you draw from showing your work in a public space?
The experience of watching Flying Lesson in a public space seems to change with each live audience. One of my favorite showings was in a theater packed with 400 children. The children seemed to gasp in unison when the flying began. After the film several kids wanted to learn to fly. I showed them the technique using my still camera and high energy jumping volunteers.

Do you find it difficult to keep the balance between artistic integrity and financial gain?
With television commercials I’m required to be a craftsmen of film rather than have a lot of artistic input. On the other hand financial gain allows me time to work on low budget films like Flying Lesson. 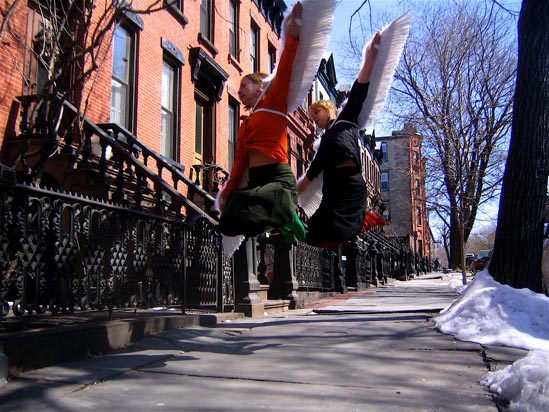