Zoe Walker & Neil Bromwhich from Smile for London on Vimeo.

Guest Artist Profile
Zoe Walker and Neil Bromwich are two London based artists who work in video, amongst other mediums. They have presented live performances in galleries across the country, and have exhibited solo work throughout Europe. Their work crosses between the gallery space and the public realm; using installations, social sculptures, and public performances as tools to open up a space where the possible and the actual come together.

Which Piece of Motion Image Most inspired you to move in to this Field?
Several Pieces of Motion image inspired us but – For Neil, The Scene where the Henry Hobson played by Charles Laughton drunkenly chases the moon from puddle to puddle in Hobsons Choice – (1954) directed by the wonderful David Lean. For Zoe it has to be David Niven walking out of the water onto the beach in a Matter of Life and Death (1946) – after falling to his death. For Both Orphee by Jean Cocteau (1950) – the moment where Orphee puts his hand slowly through the mirror and enters the other side the world of the dead. Cocteau actually used a vat of mercury to create this simple but iconic special effect.

Whats The weirdest thing that’s happened to you when making a film?
For Zoe, many Things floating down the Thames on an Island Life Raft , while some small children on a house boat shout “are you OK?!” and I get stopped by the River police. For Neil, Zoe floating off into the middle of Keilder Waters Reservoir in a Reservoir bubble wrap ‘Ice-burg’, while I was attacked by a black clouds of midges while I trying to retrieve her by swimming with a rope in my mouth to attach to the bubble wrap ice berg, like a rescue dog. all this while our assistant was hiding in the car to get away from the Midges.

What is your favourite thing about London?
The People.

What Made You Smile today?
My friend the musician Marshal Milk and his new band. 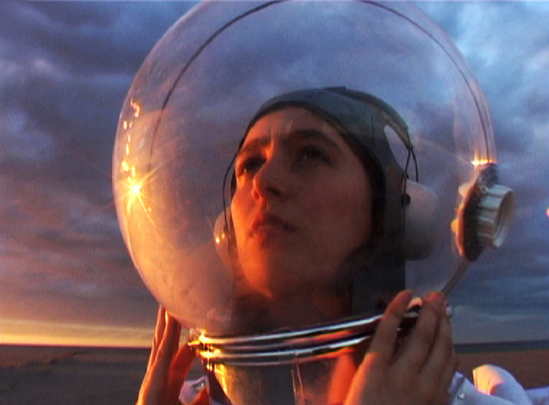