Stuart Pearson Wright from Smile for London on Vimeo.

Guest Artist Profile
Artist, Stuart Pearson Wright, is best known as a painter, but in recent years he has been making film with his first, Knight’s tale, in 2005 and now MAZE featuring Keira Knightley, which he has edited for Smile for London. Stuart grew up in Eastbourne, Sussex, but is now based in London where he has been practising artist for just over 20 years.

Which piece of moving image most inspired you to move into this field?
The film which most inspired me to work in the medium is a ten minute play by Samuel Beckett called Act Without Words II which was filmed as part of the Beckett on Film series by Channel 4 and Directed by Enda Hughes. It’s a strange and wonderful little piece but demonstrates well that film can entirely depart from traditional plot/narrative structures whilst remaining engaging, funny and thought provoking.

Do you find it hard to strike the balance between artistic integrity and financial gain?
I don’t have any problems in striking a balance between artistic integrity and financial gain. I should stress that this isn’t due to any kind of moral triumph on my part however, but due to sheer bloody-mindedness and obstinancy. I only know how to do things in the way that I know how to do them. I wouldn’t have the cunning necessary to operate in any other way. It’s fortunate however that the work I make is appreciated enough by others that they have bought it.

Do you get the opportunity to create your own personal work outside of commissioned or commercial work?
Most of the work I make, whether it’s paintings or film-based, is self-initiated. When I began working as an artist I made lots of commissioned portrait paintings but I have largely moved away from that now. The human remains my focus of interest though. I am new to working in film, having only made two pieces: Knight’s Tale and MAZE. In both pieces I performed and directed. I’ve got plans for further work in the medium.

What has made you smile today?
Tupperware. Seeing everything fitting neatly into little clear plastic boxes with airtight lids, with no spillage makes me realise that there is order to be found in chaos, anything is possible and that life is worth living. 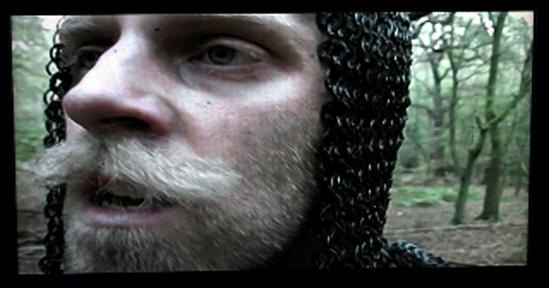