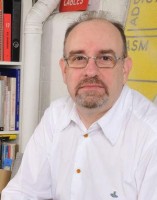 Malcolm Garrett RDI is one of the world’s best-known graphic designers in popular culture, having designed the graphic image of musicians such as Buzzcocks, Duran Duran, Simple Minds, Boy George and Heaven 17. He art directed the music, art and fashion magazine New Sounds New Styles and has designed books and catalogues for the Royal Academy, Faber & Faber, Phaidon, Brian Eno and many others. Malcolm’s designs include exhibitions for the Science Museum in London and Museum Boymans-van Beuningen in Rotterdam, while an exhibition of his own brand designs, titled Ulterior Motifs, was shown at the Design Museum in London as well as touring Tokyo and New York. His pioneering digital design over the last two decades earned him the title of Royal Designer, designing interactive work across disc, web, mobile, Interactive-TV and Interactive-Cinema. He has created film titles for artist-director Sam Taylor-Wood and stage projections for the dancer Michael Clark. Other designs for stage and screen include his graphic design for film director Peter Greenaway, titles for the film Elizabeth, and an installation with Martyn Ware’s Illustrious Company at the Venice Architecture Biennale.