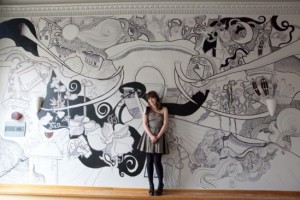 Lizzie Mary Cullen is a multi-award-winning designer based in London. Lizzie graduated from Goldsmiths College in 2008, and has since exhibited internationally in New York, Paris and London, and is represented by Phosphor Art. Lizzie was named one of the Hot 50 People Making a Difference in Design by Design Week magazine (DW2011) and has been featured in various publications and books. She has also featured on BBC London radio, The Independent and in many leading design publications and national papers.