Not Just Moving Pictures. Pictures That Move You

As far as I remember, the first example of “motion graphics” to capture my imagination was the opening sequence of “North By Northwest” at around 10 or 11 years old. 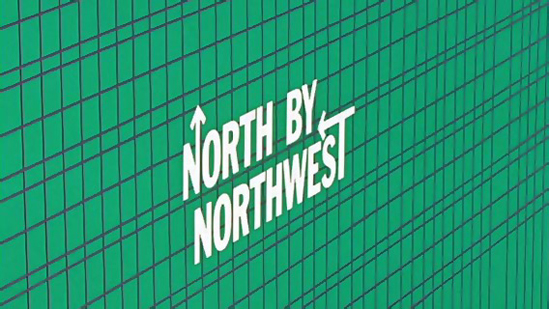 Hitchcock’s classic proto-action movie was one that BBC2 regularly aired on a Sunday afternoon. I happened to catch the titles and that was enough to hook me in to what has subsequently become one of my favourite films.

A significant part of that enduring pleasure stems from the intrigue and sense of impending, calamitous adventure evoked by those converging lines.

At the time I had no idea that what I was seeing could be termed as motion graphics. To my childish brain it was simply a cool piece of animation that provoked in me a feeling of apprehension and excitement.

The reveal from flat, green background to the live action shot of an office tower reflecting the bustling, ant-colony like city below still prompts a shiver of excitement despite having enjoyed the sequence countless times.

Althought Bernard Herrman’s propulsive, verging on hysterical score does its fair share of heavy lifting when it comes to establishing the tone of the film, the simple, elegant but disquieting design by Saul Bass still remains unbeaten in my eye for movie title sequences.

A few have made game stabs at topping it notably in David Fincher’s Panic Room,

However as slick and beautiful as those are, the photorealistic titles and names hanging over New York are more impressive for their technical flare, than they are evocative. They’re also a little too obvious a homage to Bass’ work, which detracts from them in my opinion.

Evocation is key to Motion Graphics work. It’s not enough for a sequence to simply be attractive or impressive. Success can lie in the work’s ability to evoke a gut level, emotional response in the viewer alone.

And an expulsive “That’s freaking awesome!” is as relevant a response as any.

Scott Pilgrim Versus The World, is a film that I have issues with. Significant issues. Deep and scarring issues based on my resounding disappointment in a movie from a director I had previously looked upon as an old buddy done good.

(Clarification: I’ve never met Mr Edgar Wright, but his work from Spaced to Hot Fuzz has me convinced that we were possibly siblings in a former life. OK… maybe close friends. Either way we have some sort of cosmic connection. Or did. I digress)

The design work from the hand painted opening titles through to 8-bit “Zelda” inspired augmentations of fight scenes are funny, exciting and just plain awesome. Their principal purpose is to draw the viewer deeper into the self-obsessed, emotionally repressed, man-child mind of the main protagonist via the iconography of one of his principal loves; Vintage video games.

Unfortunately the graphics weren’t enough to distract me from wanting to slap the whiny, precious, hipster-twat at regular intervals throughout the movie.

On a lighter note, there is an extremely comprehensive dissection of the opening credits to be found at Art Of The Title

Surely if you’re an entertainment brand, your brand identity should be entertaining?

And then I have a cup of tea and watch the E4 idents again to remind myself that the industry within which I work is still capable of eliciting nuggets of pure joy such as this,

Endlessly entertaining idents’ for an entertainment channel, they acknowledge that the audience has an imagination and appreciates attention to detail, rather than resorting to beating one around the eyeballs with a giant logo, or attempting to patronise the viewer into thinking that this channel is the absolute epicentre of his or her existence.

The E4 idents are also a bit goofy and have the appearance of a labour of love. I believe that decent motion graphics work displays a healthy dollop of the designer’s own personality right at the heart. If that can be achieved without allowing personal style to overwhelm the brief’s objective then you’re onto a winning deal.

Motion Graphics can also alter the viewer’s perception or explore a familiar subject from a new angle.

This commercial for Canal+ Sport uses time-slice techniques and post-production to combine a selection of sporting vignettes into a single, seamless, ethereal ballet. This throws unique light onto the featured athlete’s skills, resulting in a sequence that reveals the beauty within the game.

OK so we at devilfish did that one but as they say, blowing your own trumpet’s a good trick if you can do it.

Of course the most important elements in the creation of an inspiring and evocative piece of work are passion and talent. Anyone can learn to use a Mac but those 2 secret ingredients are really what make great motion graphics projects fly.